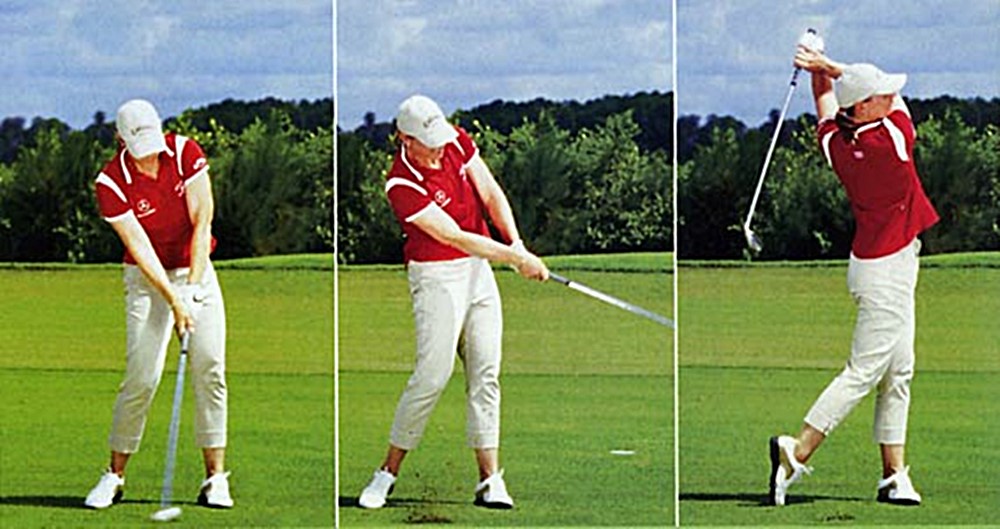 Why this is the biggest myth in golf…

Every week I hear amateur golfers telling each other that the cause of the bad shot they just hit was because they lifted their head.

This is usually followed by the instruction “KEEP YOUR HEAD DOWN!”

I even have pupils tell me after a bad shot in a lesson that they ‘knew’ what went wrong there… “I lifted my head!”

I often show the pupil the video back and prove to them that they did not lift their head and in actual fact, the thought keeping their head down was one of the main causes of the bad shot.

This SHOCK news is often hard to take on board, so ingrained is this thought in the mind of the amateur golfer. In fact, this swing advice seems the fix for pretty much every bad shot.

Let me help you now…GET RID OF THE THOUGHT ‘KEEP YOUR HEAD DOWN!’ It will be one of the best things you do for your golf game, AND your physical health!

In over 20 years as a PGA golf coach I can tell you how many times someone lifting their head was the cause of a bad shot – NOT ONCE!

Most advanced level players understand that keeping the head down is some what undesired and once they have hit the shot they allow the head to release freely.

An inhibited head movement in the follow through restricts shoulder rotation, weight transfer and then ultimately club path through impact. It will also effect the release of the forearms and club head.

Worse still, it putts extra strain on your back and neck and, if you were to rotate effectively through impact and keep you head ‘down’ at the same time, you would rupture the top of your spine! Keeping your head down also effects your starting posture. The spine becomes curved and with the chin tucked in to your chest you cannot turn properly and build up power. In many cases keeping the head down like this actually causes the body to lift in the backswing as the shoulder pushes the chin up.

Jim Mclean and Hank Haney are two of the Worlds’ top coaches and here is what they have to say:

“Many top players never see the ball at impact or even in the downswing. Players that do this include – Annika Sorenstam, David Duval, Jim Furyk, Steve Elkington and Paul Azinger. You must almost consciously look up at the target quickly after impact or risk hanging on the right side too long and restricting the movement of the body.”
Jim McLean

”I worked with Tiger to look up very quickly almost before he hit the shot like David Duval and Annika Sorenstam. Releasing the head early really helps to stop the body from working underneath and back in the downswing.”
Hank Haney (Excerpt from The Big Miss)

I hear so many well intentioned parents, grandparents, husbands, friends and so on telling the new golfer to ‘keep their head down’.

I cringe when I hear this as I know what damage it does to a potentially good golf swing. So, please stop giving out this terrible advice and start letting yourself and your fellow golfers develop a swing that flows through to face the target, just like all good players do!

STOP TELLING EACH OTHER TO KEEP YOUR HEAD DOWN – PLEASE!

You could argue that there are many top players who are still looking at the ground where the ball was after impact but I can tell you that this is not a conscious effort. You will see that the head is free to rotate with the body thus allowing the swing to sequence better, creating more power and greater accuracy.

Next time you go to the range – give it a go for yourself and experience the freedom of movement and extra power you can create.