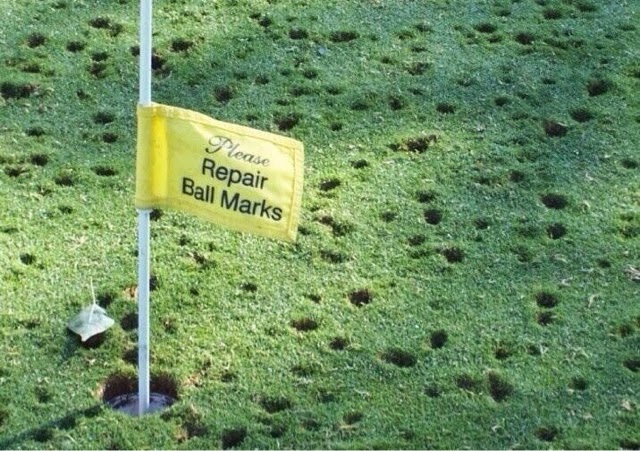 As a 14 year old and just as I was getting the golfing bug, I did two weeks work experience with the greenkeepers at the World Famous, Ganton Golf Club.

Ganton is located just outside my hometown of Scarborough, with the course famous for being one of only a handful in the World to have hosted The Ryder Cup, The Walker Cup and the Curtis Cup. Me on the 6th tee at Ganton Golf Club

A few years later it would be the venue where I would start my career as a PGA Professional as I took the assistants job at the club.

However, it was in that two weeks as a greenkeeper where I learned lots about maintaining and caring for a golf course and one particular thing stayed with me and I’ve shared it with 1000’s of golfers since…. How to repair a pitchmark, correctly! Now that the season has started, the increase in numbers playing on the courses means that inevitably more pitchmarks will be made on the greens. However, there is no excuse for not repairing them after you have made one.

The increased numbers arise despite just about every golfer I speak to speak to saying, “Why can’t people repair their pitchmarks?” Everyone you talk to always claim that they repair 3 or 4 on every green!

As well as looking unsightly, from a golfing point of view, pitchmarks can affect ball roll and cause a player’s putt to bobble and deviate offline. Studies have shown that on average, a golfer will make 8 pitchmarks during a round of golf. If 130 rounds are played per day, that’s over 1,000 pitchmarks per week; no surprise then that it can be difficult to hole a putt!

It isn’t just about attempting to repair the pitchmark… it is about repairing it properly. Many golfers out there do not know how to do it correctly and damage the grass in the process…. As part of our campaign to spread awareness of the ‘Pitchmark Problem’ we are giving away pitchmark repairers to the first 100 people to come along to Dunes Golf Centre to claim theirs. Don’t be shy, everyone should carry one of these tools when they play. However, if you do find yourself without one when you are playing, you can still repair a mark effectively with your tee peg in the same way as stated above.

We are blessed with an abundance of great golf courses in the North East of Scotland so let’s all do our bit to keep them in great condition. Pitchmarks (and divots) are not the responsibility of the greenkeeping staff but of every golfer who plays the game.