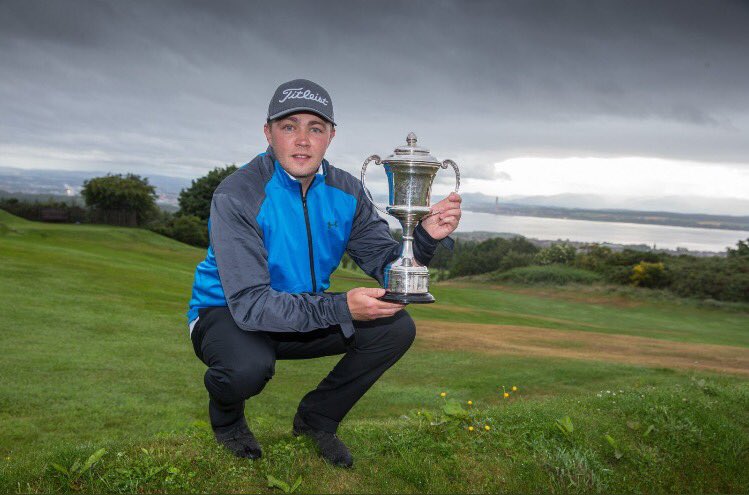 The event, formerly known as the Assistants Championship, has a rich history of previous winners that have progressed onto the European Tour; Craig Maltman, Scott Henderson, Alastair Forsyth, Craig Lee and most notably, Open Champion Paul Lawrie. Teeing up in this event for the first time since joining the PGA, Kris Nicol of Dunes Golf Centre fired a solid opening round of 70 (-1) to finish the day in sixth place.

He followed this up with a 68 on the second day but Alastair Forsyth, having just come off the European Tour, showed his class with a 67 to open up a two-shot lead.

Round three was played in constant rain and high winds but Kris battled round to shoot the score of the day with a 69. Alastair shot a 70 to retain a one shot lead with just one round to go in what had now become a two horse race.

Kris, out in the final pairing with Alastair, started strongly with a birdie on the fourth to draw the pair level. However, he followed this up with back to back bogeys whilst Alastair completed the front nine with straight pars. With nine holes to play Kris was two shots back and he needed to find some magic in the blustery conditions. Alastair gave back on the 10th with a bogey, both players made birdies on 14 and then Kris got things level on the 16th with another birdie.

Alastair found the bunker on 17 and failed to get up and down so made a bogey whilst Kris kept his cool to finish with two solid pars, completing the back nine in two under, to secure a fantastic victory. The win earned Kris a cheque for £1000 plus he gained an exemption for the Scottish PGA Championship that he would otherwise had to have tried to qualify for.

“I feel my game has been coming good for a while, stated Kris, I’ve worked loads on my short game with Pete (Myers) and the time spent hitting low shots in the wind definitely paid off this week. It’s good to get a win and competing against Alastair down the stretch was good fun.”

Kris is now turning his attention to qualifying for the Scottish Open, a feat that he achieved last year.

The two-round event, supported by Aberdeen Asset Management and VisitScotland, takes place on July 8 and 9 and will see four players secure spots in the £7 million Rolex Series event at neighbouring Dundonald Links the following week.

In-between preparations for the Scottish Open, Kris was straight back to work on Monday as he had an afternoon full of lessons booked in the diary.

Kris is fast building a reputation as a great teacher and is available most days for lessons at Dunes Golf Centre. He shares his knowledge of the game and puts it across in a simple, easy to understand way that is benefitting local golfers of all abilities. If you would to improve your golf then book an Initial 1 hour Lesson with Kris or PGA Coach Sam Griffiths while it is on special offer at just £20.00.
This can be booked online at http://www.dunesgolfcentre.co.uk/bookalesson/